Get To Know The Best Dogs For Rabbit Hunting

Did you know that some dog breeds are better suited to hunting rabbits? Want to know details about these super breeds? This article will discuss the most common hunting dog breeds and how you can train your dog to hunt rabbits!

What Is The Best All-Around Hunting Dog?

Of course, dogs are descended from wolves, surely you already knew that, but you must be wondering, even with domestication, do primitive instincts remain? Domestication took place around 500,000 years ago, and the first evidence dates back to the ice age, the most likely theory is that our ancestors approached wolves to improve hunting, providing food for these animals that passed to live with humans naturally, as there was a mutual contribution between the two species. Even with the occurrence of the first signs of domestication being so old, to this day hunting instincts remain in dogs. If you have a dog, you can easily see that the hunting instinct inherited from wolves remains to this day. It is activated when a dog spots another animal, as they understand that every small animal is potential prey. Therefore, it is very likely that on a walk on the street your dog will show hunting behavior when seeing another animal, such as a cat or bird.

First of all, we need to understand why some dogs are more skillful in hunting than others. Some breeds have anatomical and behavioral differences that may seem like small distinctions, but that make all the difference when it comes to hunting. For better understanding, we will address some breeds considered good for hunting that have different characteristics.

Can Any Dog Catch A Rabbit?

The listed breeds have different characteristics that make them suitable for hunting, but there are others with this ability such as the Basset Houd, Daschund, Cocker Spaniel and many more.

The main characteristics that a good hunting dog needs are: a lot of energy, ease of training, a keen nose and courage. But what is the best hunting dog? Given these characteristics, the Labrador Retriever breed is the most suitable, as they are extremely intelligent, have plenty of energy and have the impressive aquatic ability. In addition, they have a great sense of smell, they are extremely docile animals and easy to train. However, even though it is considered one of the best breeds for hunting, it may not be the best breed for hunting rabbits. Since rabbits are extremely fast, their main defense against predators.

So What Is The Best Breed To Hunt Rabbits?

Warren Hounds: one of the oldest breeds in the world. It is extremely intelligent, easy to train and has a lot of energy. It is a breed of Portuguese origin with a fearless temperament, which does not allow it to give up the hunt easily. The breed has variations of different sizes, being the most suitable for hunting rabbits is the small one, as they are more agile and fast. Although Warren Hounds are the most recommended for hunting rabbits, that doesn’t mean you can’t use other breeds or even a mixed breed dog for hunting animals, either way, it takes a lot of training.

How Do You Catch A Rabbit With A Dog?

Training to hunt rabbits using the help of dogs consists of training them to stimulate sniffing and predatory instinct. As we already know, the instinct of hunting, chasing and sniffing are innate characteristics of dogs, so to facilitate stimulation, start training your dog in the puppy stage, because at this stage they are more open to training. You have to remember that to train you need a lot of patience and perseverance, repetition is the way to success!

To start training it is advisable to wait until the dog completes three months of life, when younger the dog may be scared in the presence of the rabbit. It is important to keep the dog in a large, fenced-in environment to encourage running but prevent animals from running away. Show the rabbit to the dog by holding it by the back of the neck and releasing it in front of the dog. The rabbit will run away and the dog will automatically chase it. Let the dog sniff the rabbits for long periods before stopping the activity, and this will stimulate the sense of smell.

Much of the evolution of training takes place through positive reinforcements. So constantly praise him when he barks at the rabbit and when he’s chasing it. As soon as you see that the training is going well, start urging your dog to do the same night training, this way, you will stimulate your dog’s sense of smell even more. Make sure your dog doesn’t get hurt or hurt the prey when you catch it.

Finally, let your dog run along with other hunting dogs, as this will stimulate his instinctive behavior, as he will copy the behavior of other dogs. However, be careful, dogs do not always behave in groups, if you see any conflict, separate immediately!

Once the dog is well trained you can enjoy the hunt with him, and you will surely get good rabbits.

What Dogs Are Fine With Rabbits?

Now, analyzing from another expectation, how are rabbits considered pets? Since dogs are excellent natural hunters, can I keep both as pets? Is there a specific breed that is friendly to rabbits?

In most cases, coexistence between species is not recommended; however, it is not impossible, dogs can socialize with rabbits. For good socialization between the species, we have to observe the temperament of each individual. However, suppose you have other animals that are considered prey (rabbits, guinea pigs, birds). In that case, you should avoid having dogs that are considered hunting dogs, such as Beagle, Weimaraner, Foxhounds and, especially, Warren Hounds. 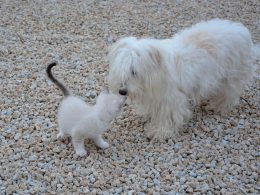 Your dog may kill a kitten to protect its food or territory. Predatory instinct or cats on their turf can also kill cats. Dogs are safer away from cats.
byPetswith.me
12 shares
12
0
0
0
0
0 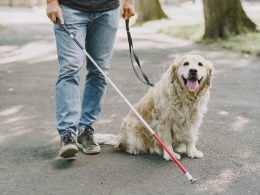 How Can You Answer Service Dog Questions

This article is about the most common questions that people ask about service dogs. We hope that you find this article useful and that you will be able to answer them with calm and collected answers.
byJessica N. D'avila 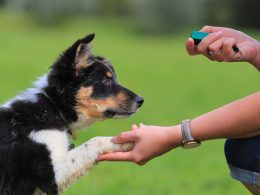 Do I Need a Clicker for Clicker Training?

Clicker training should update training rules based on what your dog does well. When a dog knows what an event marker means, it reinforces that understanding.
byPetswith.me 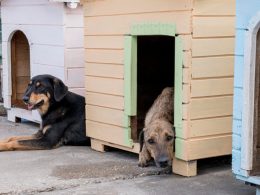 This article will discuss the various types of dog houses and the construction method for the dog house. We also show you how to choose the best one for your dog’s kennel.
byPetswith.me
wpDiscuz