Natural Food/Homemade Diet For Dogs, What Is It?

The premise of natural food is to compose the pet’s diet with ingredients intended for human consumption. Trying to approximate the composition of the food that animals (dogs and cats) got from nature, and with the assurance of knowing that our pet is receiving high-quality food.

Owners’ interest in this type of food began due to a large recall of canned pet food in the United States between March and April 2007. During this period, a Canadian company, the largest food manufacturer in North America, announced the withdrawal from the market of 60 million canned pet food. The reason for the recall was the death of 16 animals (officially confirmed) with kidney and liver failure. The agent causing this contamination was identified as wheat gluten contaminated with melamine, a substance used in the manufacture of plastics.

Faced with food safety problems and the concern with quality foods that meet the nutritional needs of companion animals, differentiated products with the appeal of “natural” began to appear on the market. In addition, the increased demand for alternative foods originates from the search for novelties in the pet food sector and the frequent humanization of animals.

What Is Natural/Homemade Pet Food?

Natural/homemade food for pets is understood to mean food without chemical processing, artificial preservatives, and additives, except for industrialized products (vitamins, minerals, and nutraceuticals) used in homemade foods to balance and make the food. Natural/homemade pet food is divided into three categories. Check it out:

What Are The Benefits Of Natural/Homemade Pet Food?

Providing a balanced natural/homemade diet for pets has several benefits. Among them, we have a significant improvement in the palatability of food, which makes the diet more attractive to animals, greater concentration of moisture that can help reduce urinary problems, especially for cats, less selectivity of food when crushed, improves coat and immunity.

And also, personalized homemade food formulated for a particular animal and made by a trained animal nutrition professional has several advantages. To give customized diets according to each animal’s nutritional needs and particularities are super recommended for animals with some comorbidities, such as diabetes, renal and liver diseases, and others.

Is There Any Harm In Offering This Type Of Food?

There are several drawbacks to domestic dog food preparation, which are often unknown to owners. Firstly, it is essential to emphasize that this type of food costs more than the complete commercial foods found in the market. Another negative point is that making meals at home requires an investment of time. So it is necessary to make purchases at the market, prepare the ingredients, and weigh and assemble the portions, and this requires storage space in freezers, so it is also essential to say that you need to be organized so doesn’t lack food that your pet.

With the growth in demand for this product, several companies are emerging in the natural/homemade pet food market, so, to get around the problem you would have when making it at home, you can order your pet’s food directly on these websites. Companies or markets, as is already found in North America and Europe.

It is not recommended to follow ready-made diets found on the internet. Cause since most of these internet recipes do not meet the nutritional needs of animals established by nutritional recommendation guides such as AAFFCO (Association of American Feed Control Officials) and FEDIAF (European pet food industry). Another critical factor is formulating a complete and balanced food, which requires specialized knowledge, so look for professionals in animal nutrition.

What Happens If You Change The Prescribed Diet?

Unfortunately, changing the diet prescribed by professionals is a widespread mistake among owners, whether changing ingredients or changing established measures. Depending on the deficiency or excess of each nutrient that is ingested, they can cause some health problems. That’s why it’s important to follow professional recommendations.

With all this information, it is easier to decide whether or not to change the type of food your animals to natural/homemade. 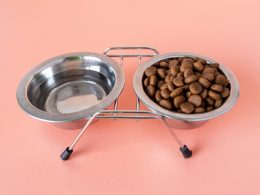 How Do I Know How Much My Dog Should Eat And The Amount Of Water It Needs?

This article will help you to provide the correct amount of food and water for your dog, as well as how to improve the water intake in the drinking fountains.
byJessica N. D'avila
1 share
1
0
0
0
0
0 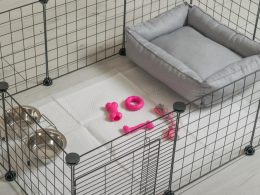 How Do You Attach Dog Crate to Exercise Pen

Can a dog crate be attached to a dog pen? Find out how to make it happen and see how to make a dog pen and crate combo for your pet.
byPetswith.me 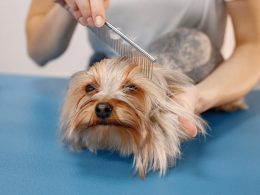 This article discusses the best ways to straighten your dog's hair. It also discusses how to Straightening your dog's coat, how to use a slicker or pin brush, and how to use a hair dryer.
byPetswith.me
1 share
1
0
0
0
0
0 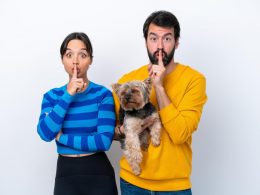 How do I know if a dog is mute? This article discusses the causes of dogs' lack of barking and how to help them stop barking.
byPetswith.me
1 share
1
0
0
0
0
0
wpDiscuz