In most cases, cats like to poop inside their litter box and then cover it up with the litter that surrounds it. However, the litter box may be too unclean for your cat to use if they suddenly start pooping on the floor.

If your cat suddenly or regularly defecates outside its litter box, you may question what is causing this. You might think your cat has a personal vendetta against you, but some common factors cause this nasty behavior.

Your cat’s behavior may result from medical issues, or it might be as simple as your cat dislikes the litter you’re using. Find out what’s causing your cat’s messes and what you can do to prevent your feline friend from eliminating in places it shouldn’t.

This problem is as complicated to answer as a cat’s thinking. As simple as your cat not being a fan of the litter you’ve provided or the litter box to more worldly concerns such as litter box placement or a feline who’s not feeling well—physically or emotionally.

There are many prospects as to why your cat is eliminated outside the litter box. First, leaving your cat’s health deteriorate could result in a potentially life-threatening disease, like a urinary tract infection.

Don’t quit even if things don’t seem to improve and you’ve reached your breaking point. An applied animal behaviorist or a veterinary behaviorist can be found through a recommendation from your veterinarian. Having an expert’s opinion is well worth the money spent.

Do Cats Poop on the Floor When They Are Mad?

When a cat is enraged, it loses control of its body and defecates on the floor. If a cat craps on the floor because it is upset, it could indicate irritation with a particular issue.

It’s not uncommon for cats to get irrational when they’re angry. Even if some growl and point, others will paw and urinate on you in the living room.

Cat owners are particularly irritated by this problem since it causes their homes to become soiled and odiferous. But unfortunately, even if they defecate on the carpet, we can’t control how they react.

There are some reasons why a cat may defecate at any given time. On the one hand, there is a problem with behavior; on the other, there are multiple problems.

As a cat owner, it might be upsetting to come into a room and discover that your feline has left a mess. But unfortunately, this is a frequent sight for some cat owners when their feline is on edge.

When a cat poos on the floor while enraged, it may have anything to do with a specific issue that the cat is enraged about. For example, defecation becomes an issue at home because of this.

It turns out that cats can feel. For example, a cat’s mind might plot retaliation or revenge pooping when the cat’s been wronged. In contrast, resentment and vindictiveness aren’t even close to being feelings.

Why Do Trained Cats Poop on the Floor?

Stress is a problem for many cats. To return to his illness, he may be stressed out due to the pain in his joints. Something that has never bothered him previously could also be causing him stress. You never know what might be bothering him, such as a raccoon lurking in the shadows behind your house. Stress can cause a cat’s litterbox habits to go awry.

Rugs appear to be the most common target for people who want to get rid of them in the wrong way. Cats seem to be drawn to the material. In any case, it’s possible that the rug’s softness and aroma are to blame. There’s a good chance absorbency is also a factor. You may never discover why your cat prefers the rug, but you’re not alone.

As soon as your cat begins to urinate outside the litter box, it’s difficult to break the habit. To get your cat to stop this nasty habit, you’ll need to follow numerous measures and monitor him religiously.

Talk to your veterinarian at this time to see if any other signs might indicate a problem, such as lethargy or vomiting. The veterinarian will thoroughly examine your cat’s health. X-rays and laboratory tests may also be recommended.

Should I Punish My Cat for Pooping on the Floor?

It’s essential to remain composed and unfazed. If your cat is misbehaving, don’t yell or pick it up by the scruff or reprimand it. As a result, cats may avoid using it because they link the litter box with dread and punishment.

To teach your cat the proper procedure for using the litter box, you don’t need to employ punishment, scolding, or rubbing their nose in their feces. Instead, more successful are gentle reminders of the litter box’s location and providing a litter box that your cat likes to use.

Cats may defecate on a rug or in another inconvenient location due to constipation. If your backed-up cat suddenly feels the need to relieve himself, it is possible that he will not be able to reach the litter box in time.

A variety of health issues can cause inappropriate soiling. The first step in diagnosing your cat’s new habit of urinating outside the litter box is a thorough physical examination to rule out any underlying illnesses. Then, make an appointment with your veterinarian immediately once for a checkup. The problem behavior may be eliminated with the proper medical treatment.

Why You Shouldn’t Teach Your Cat to Use the Toilet?

The oocysts from infected cats will be in their feces for a while, even if they don’t show any symptoms of the sickness. Oocyst-infecting oocysts can’t be killed by the standard wastewater treatment that flushed water goes through. So it’s possible that this pathogen and the sickness it spreads could make their way into nearby bodies of water and infect or kill local wildlife such as seals, otters, and other water-dwelling species.

Cats have developed a variety of distinct habits during their evolution, including how they get rid of excrement. As a result, some ways to identify if the other cats in an area are friends or foes are based on their excrement and urine scents.

The cat’s natural tendency to scratch surfaces and bury waste products is also a factor. They may do this in the wild to avoid detection by other predators or prey. Cats naturally burrow their waste, so we need to provide litter.

Remove their litter and install a toilet, and they will lose their ability to bury, but they will retain their desire and inclination to bury instead. In addition, a cat’s instinctive activity of pawing at the environment around them even after being toilet trained may lead to additional stress, resulting in potty accidents or other stress-related issues.

How Do You Discipline a Cat That Poops on the Floor?

Having a cat who defecates on the floor can be a real pain! Even if you spend a lot of money on a fancy litter box for your cat, you’ll still have to clean up after him if he pees outside the box.

It would help if you rarely had to discipline your cat in stable conditions. Cat behavior problems like scratching, spraying, meowing, and going to the potty in places they shouldn’t can and should be resolved through proper training as soon as possible.

Try to figure out why your feline pet behaves in a way you don’t like. Whether your cat has started urinating outside the litter box or not is a medical or behavioral concern. For example, your cat may have a urinary tract infection or a blockage.

It is best to cover up or limit access to the area your cat uses as an alternative litter box if your cat defecates on the floor. Using this method will help keep your cat from pooping there again.

If you have more than one cat in your home, it is best to have multiple litter boxes all around the house so that each cat may do their business in a comfortable location. Sometimes, a litter box is already taken by a second feline, resulting in a second feline pooping on the floor since they feel they have no other choice.

Use a box with a low lip as a starting point. The litter box may be painful for particular seniors or cats with hip dysplasia. To avoid pooping outside the box, they may wish to exit the box immediately. 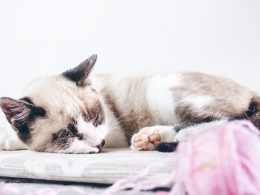 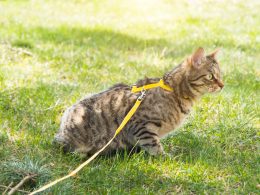 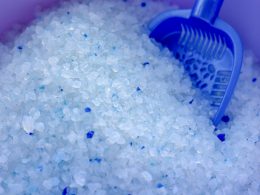 How To Reuse Crystal Cat Litter

You don’t have to throw out the crystal cat litter if you know how to reuse it. Learn how to save money and cut costs by saving cat litter.
byPetswith.me 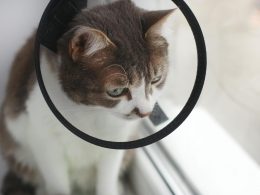 Cat Won’t Use Litter Box With Cone On